I fudged on my Diet to Live For today. My friend and I went out to take her sister to the doc, and on the way home, we decided we wanted burgers for dinner. Since I started fighting a cold virus a day or so ago, I just didn’t feel like cooking. So, we went to Backyard Burgers, because it’s right by her house, and because…well,they’re good.

It started innocently enough. We ordered the American burger, with cheese and bacon, lettuce, tomato, onion, mayo, mustard, and ketchup. The woman behind the counter asked what kind of bun, and we said it didn’t matter, we weren’t eating it. She said, “I can make it a low carb burger, no problem,” which we eagerly accepted.

Now here is where the problem started. I asked her if their fries had wheat in them, because I was allergic to wheat. She ran to the back to check, and announced that the box only said “potatoes.” I said if there was an ingredient list and all it said was potatoes, then we were safe. So we both ordered fries. Once in the car, however, I realized that these were “seasoned” fries, and might not be so innocent.

At home, before we ate, I went online to Backyard Burger’s website to look up the allergens. Sure enough, the fries contained gluten.

By that time, the smell of the fries, plus the burger and my hunger, all conspired to have me throw up my hands and say, “Screw it, I’m eating the damn fries!” And so I did. All of them. And they were good.

Now I’m feeling a little guilty and ashamed at falling off the wagon and eating something with grains in it. True, it probably wasn’t enough to cause me to instantly swell up and gain 5 pounds, and since I don’t have celiac disease and am not really allergic to gluten, it’s probably not going to kill me.

A friend on Facebook, when I confessed this ‘sin,’ told me to prove to everyone out there that succumbing to a moment of weakness doesn’t mean I have to give up the Diet to Live For. So I went to the kitchen, and made a panful of bacon, and my friend and I ate bacon and sliced tomatoes. Her dog, Miles, helpfully watched me, in hopes of scoring some of the bacon…and of course, we complied. That is one spoiled dog. And I am feeling much better now, after climbing back on the wagon.

Commenting on Facebook while frying bacon, with dog keeping watch

Redemption for my sin of eating gluten + fries 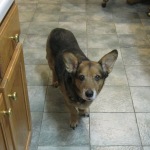 Miles the Dog hoping for a bacon handout

This entry was posted in My Log, What I'm eating. Bookmark the permalink.